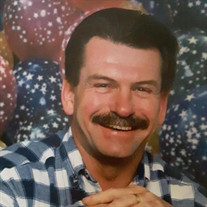 Jerry Thiel, age 68 of Grand Island, broke the bonds of this world and ran in to the arms of our Savior Jesus Christ on 6/11/2021 at his home, surrounded by family. Jerry was born on 8/7/1952 in Ogden, Utah to Frank and Jeane (Cooley)Thiel. Jerry was the fifth of Frank and Jeane’s 14 children. Jerry attended schools in Utah then Nebraska, graduating from Kenesaw High School in 1972. Jerry loved all sports and excelled in baseball. At age 13, Jerry climbed behind the wheel of his first semi and never looked back. He drove mostly the western states with his father and his beloved brothers. His preference was always a long nose Peterbuilt. Jerry was dependable, hardworking, and very skilled at his profession. Throughout his driving career he earned numerous safe driving awards. His most recent driving employment was with Bosselmans in Grand Island until suffering a massive stroke 5 years ago leaving him unable to continue his career. Jerry was strong willed and never stopped believing he would walk again. In 1976 Jerry was united in marriage to Shirley Mommsen. In this unity they had two daughters Erica Thiel Ritz and Erin Thiel. Whenever he had the chance, he was teaching his girls how to mow the yard properly and drive a vehicle. Both of his girls enjoyed a good 1 on 1 basketball game with him growing up and listening to him and his brothers and sisters reminisce about the past. Jerry was a sports fan and enjoyed getting together with all of his family to watch the Huskers play. He attended every activity that he could for his grandchildren and loved to watch all of his grandchildren play ball and sing in their school programs and was always readily available for good advice on all subjects especially baseball. His grand babies were his hearts joy. In 2003 Jerry was united in marriage to Sharon (Spence) Ritz. With this unity he welcomed two step children, TJ Ritz and Tina Kosinski. Jerry was a devoted and loving husband, Dad, grandpa, great grandpa, brother, uncle and friend. He will be dearly missed by many. Jerry is survived by wife, Sharon; daughters, Erica (TJ) Ritz of Grand Island, Erin Thiel of Grand Island and Tina Kosinski (Chad Sandoe) of Grand Island; grandchildren, Justice, Kaden, and Logan Ritz, Urijah, Ariana, and Arabella Alloway, Kyle (KaSandra) Kosinski, Wade, Kaylee, and Kassie Kosinski; seven great grandchildren; brothers, Bill and Jim Thiel of Holstein, Ne, Ed (Cheryl) Thiel of Hastings, Ne, Mike Thiel of Aurora, CO, and Dan (Monica) Thiel of Wellington, CO; sisters, Bonnie LeFevre of Hastings, Ne, DeeAnn (Ron) Krysl of Atkinson, Ne, Terry (Jim) Nabower of Holstein Ne, Cheryl Turner of Westminster, CO, Jane Brennfoerder of Okalahoma City, OK and June Stark of Henderson, NV; brother-in-law, Danny Klein and many nieces, nephews, great nieces and nephews as well as friends. He is preceded in death by one unborn baby; his parents, Frank and Jeane Thiel; mothers- in- law, Alice Spence and Irene Mommsen; father-in-law, Gerhard Mommsen; brother, Karl Thiel; sister, Fanny Klein; brothers in law, Franklin D. LeFevre, Jim and Ron Spence and nephews, Scott and Steve LeFevre and Ryan Thiel. Celebration of life services will be held at Peace Lutheran Church 1710 N North Road, Grand Island Ne with Pastor Luke Biggs officiating on Wednesday, June 16, 2021 at 10:30am with a luncheon to follow. Burial will be held at a later date.

Jerry Thiel, age 68 of Grand Island, broke the bonds of this world and ran in to the arms of our Savior Jesus Christ on 6/11/2021 at his home, surrounded by family. Jerry was born on 8/7/1952 in Ogden, Utah to Frank and Jeane (Cooley)Thiel.... View Obituary & Service Information

The family of Jerry Thiel created this Life Tributes page to make it easy to share your memories.

Jerry Thiel, age 68 of Grand Island, broke the bonds of this...

Send flowers to the Thiel family.