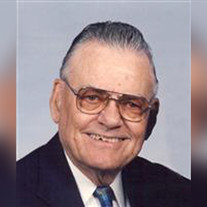 John W. Hines, 86, of Lincoln, formerly of Grand Island, died Thursday, August 20, 2009, at Holmes Lake Manor in Lincoln.       Memorial services will be at 11:00 A.M. Monday at the Gollaher Chapel of Trinity United Methodist Church in Grand Island.  The Rev. Del Roper will officiate.     There will be no visitation.  At his request, Mr. Hines’ body was cremated.  Burial will be in Westlawn Memorial Park Cemetery with military honors provided by the United Veterans Honor Guard. John was born May 29, 1923, to Percy and Laura Hines at Gothenburg, Nebraska.  His survivors include his wife, Doris, one son and daughter-in-law, Jim and Dee Hines of Lincoln, one daughter and son-in-law, Susan and Mike Vanlaningham of Ingleside, Illinois; and one sister, Helen Neel, of Gothenburg.             Others left to cherish his memory include four grandchildren: Cherie (Jared) Anderson, Jenni (Bryan) Olesen all of Lincoln, Becky (Bob) Stevenson, Tim Vanlaningham all of Illinois, and eight great-grandchildren. He is also survived by many nieces and nephews.     John grew up on the family farm near Gothenburg.  He attended Banner Methodist Church.  He entered the service in March of 1943 and served during World War II in the Philippines and Japan, honorably discharged December 17, 1945.  John married Doris Halla on April 19, 1947.   The couple lived in Grand Island for 62 years and were members of Trinity United Methodist Church.  John built many fine homes in Grand Island during his years as a carpenter.  John enjoyed camping and fishing, playing cards and his wife's fried chicken!  He was a loving husband and devoted dad and grandpa.     He was preceded in death by his parents, two sisters and one brother.  Memorials are suggested to the family's choice.     Condolences may be sent to the family at 7601 Cherrywood Dr. Apt. 6, Lincoln, NE  65810.  Online condolences may be directed through www.livson.com

The family of John W. Hines created this Life Tributes page to make it easy to share your memories.

Send flowers to the Hines family.