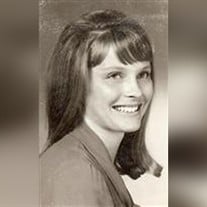 Judyann Patterson, 64, of Grand Island, died Sunday, August 2, 2009 at the St. Francis Medical Center.    As per her wishes, Mrs. Patterson’s body was cremated, and there will be no visitation.  Burial of the cremains will be on Saturday, August 8th at 1:00 P.M. at the Kit Carson Cemetery.    Livingston-Sondermann Funeral Home is in charge of arrangements.    Mrs. Patterson was born on May 3, 1945 in Cheyenne Wells, Colorado to Henry C. and Irene (Johnson) Troue.      Survivors of the immediate family include her husband, Johnny Patterson of Grand Island; one daughter, April Patterson of Grand Island; and one sister, Norma Emerson of Elizabeth, Colorado.    Additional survivors include one grandson, Joshuah Patterson of Grand Island.    Mrs. Patterson received her education in Kit Carson, Colorado, and then attended Business College in Denver.    She married Johnny Patterson on April 15, 1966 in Denver.    The couple lived in Colorado, Texas, Florida, and Louisiana before moving to Lincoln in 1996.  They moved to Grand Island in 2003.    Mrs. Patterson enjoyed embroidering, and spending time with her family.  She especially loved having her grandson, Joshuah read to her.    She was a member of Trinity Lutheran Church.    In addition to her parents, she was preceded in death by an infant brother, Norman    Memorials are suggested to Trinity Lutheran Church in Kit Carson, Colorado.

Judyann Patterson, 64, of Grand Island, died Sunday, August 2, 2009 at the St. Francis Medical Center.    As per her wishes, Mrs. Patterson&#8217;s body was cremated, and there will be no visitation.  Burial of the cremains will be on Saturday,... View Obituary & Service Information

The family of Judyann Patterson created this Life Tributes page to make it easy to share your memories.

Send flowers to the Patterson family.