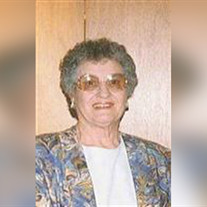 Julia Thomas, 87, of Safford, Arizona, formerly of Grand Island, died Wednesday, August 14, 2013 at Mount Graham Hospital in Safford. Funeral services will be at 10:00 am Monday, August 26th at Livingston-Sondermann Funeral Home. Burial will be in Westlawn Memorial Park. Visitation will be from 4-8 pm Sunday with a Trisagion Memorial Service at 4 pm at the funeral home. Memorials are suggested to the family. Mrs. Thomas was born on April 22, 1926 at Scottsbluff, Nebraska to George and Katherine (Johns) Fotinos. She grew up on the family farm north of Wood River. She received her education near Wood River and graduated from Wood River High School. Julia was united in marriage to Wayne H. Thomas on September 5, 1948 in Grand Island. The couple lived and farmed around Wood River their entire married life. She was a homemaker and helped her husband on the farm. She also worked at the Cornhusker Army Ammunition Plant during the Korean War.  Mr. Thomas preceded her in death in 1996, after nearly 50 years of marriage. In 1997, Julia moved to Arizona to be closer to her daughter, Kristine, and her family. While in Arizona Julia was active in helping Kristine with Schade Quarter Horses and Ashton’s Bullmastiffs . She was a member of the Greek Orthodox Church, a volunteer for the Grand Island Interfaith Task Force and for the Disaster Relief in 1980 and 1981. She also served as a Girl Scout den mother and was a member of the American Legion Auxiliary in Wood River.  Survivors include her daughter, Kristine Ann Schade and her fiancé Rick Zocco of Arizona; a grandson, Alexander Schade of Arizona;  a brother Pete, and his wife Joyce of Wood River; a sister, Rosie Carruth of Grand island, and a sister, Elizabeth Sullivan of Norfolk, Ne. She is also survived by several nieces and nephews. Julia was preceded in death by her parents, her daughter Katherine Thomas, a sister Juanita Schaefer, brother Andrew Fotinas and niece, Sandra Vanosdall.

The family of Julia Thomas created this Life Tributes page to make it easy to share your memories.

Send flowers to the Thomas family.