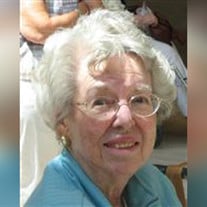 June Magalene Lundgren, 87, formerly of Kearney and Grand Island died Friday, July 31, 2009, in Wayzata, Minnesota. Services will be at 10 A.M. Wednesday at Livingston-Sondermann Funeral Home in Grand Island. The Rev. Jerry Quandt will officiate. Burial will be in the Westlawn Memorial Park Cemetery. There will be no visitation. June was born March 26, 1922, at Parsons, KS to Lester and Belva (Taylor) Dickerson. She was preceded in death by her husband, Ray, in 1989. Survivors of her immediate family are her daughter, Nancy Lundgren-Smith of Maple Grove, Minnesota, and granddaughter, Tara; her son John Lundgren and daughter-in-law Meredith of Edina, Minnesota, grandchildren Jeff and Amy, and great-granddaughter Brianna. June is also survived by her brother, Larry Dickerson. She was preceded in death by her other siblings Vernon, William, Edward, Robert and Euelia. June graduated from Parsons Junior College in 1941. She became an executive assistant for peter Kiewit of Omaha, working in Nebraska, Washington, Montana and Texas. In 1945, she married Raymond T. Lundgren. They raised their family in Kearney, Nebraska where she worked for the Hub Printing Company as an accountant and was active in the First Christian Church. In 1969, she and Ray moved to Grand Island where she worked for the Nebraska Department of Revenue. After her retirement, she did volunteer work at Stuhr Museum and the gift shop at St. Francis Hospital in Grand Island. June enjoyed sewing, gardening, and fishing. Memorials are suggested to Stuhr Museum.

The family of June M. Lundgren created this Life Tributes page to make it easy to share your memories.

Send flowers to the Lundgren family.