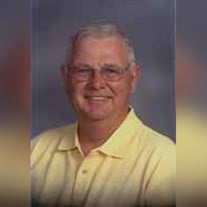 M.K. ‘Ken’ Caraway, 66, of Doniphan, Nebraska died Wednesday, May 17, 2006, at Tiffany Square Care Center in Grand Island.   Services will be Monday May 22, 2006 at 10:30 A.M. at the United Methodist Church in Doniphan.The Rev. Jim Johnson will officiate.Burial will be in the Cedarview Cemetery.  Visitation will be Sunday May 21, 2006, from 4 to 8 P.M. at Livingston-Sondermann Funeral Home in Grand Island with the family greeting friends from 4 to 6 P.M.    Mr. Caraway was born November 29, 1939, at Bastrop, LA to Marion A. and Annie (Pace) Caraway.    Survivors of the immediate family include his wife, Elaine Caraway of Doniphan; two sons and daughters-in-law, Jimmy and Tami Caraway of Cranberry Township, Penn. and Jerry and Joan Caraway of Osceola, NE; a daughter and son-in-law, Jena Caraway and Wayne Humphrey of Orange Park, FL; one sister, Julia Patrick of Summersville, TN; a step-son and step-daughter-in-law, Bill and Johna Niedfelt of Doniphan; and a step-daughter and step-son-in-law Carrye and Dean Crowder of Plano, TX.   Additional survivors include six grandchildren and four step-grandchildren.    Ken grew up and attended school in Bastrop, LA.    He married Carolyn Reynolds on October 31, 1957, at Fayetteville, Miss.    Ken moved to Nebraska in the early 70’s.He married Elaine Niedfelt on July 2, 1989, at Doniphan, NE.    He made his living in sales and had most recently worked for Yellow Book until his retirement on April 1, 2005.    Ken was a member of the Doniphan United Methodist Church, the Platt Deutsche, Saddle Club and Lions Club.    He was an avid sports fan.   Mr. Caraway was preceded in death by his parents, his first wife, Carolyn; and an infant brother Memorials are suggested to the family’s choice.

The family of Ken Caraway created this Life Tributes page to make it easy to share your memories.

Send flowers to the Caraway family.