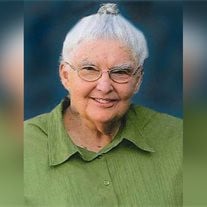 Laura Elizabeth Kleeb, 88, of Grand Island, passed away peacefully with family by her side on Saturday, December 28, 2019 at Good Samaritan Society in Grand Island. Funeral service will be 10:30 am Friday, January 3, 2019 at Livingston-Sondermann Funeral Chapel. A burial will follow in Westlawn Memorial Park Cemetery. Visitation will be Thursday from 5-7 pm at Livingston-Sondermann Funeral Home. Laura was born Oct. 17, 1931 at Porter Hospital in Denver, CO to Carl and Merle (Waldron) Grotz. She grew up in Colorado and Nebraska. Laura graduated from York High School with the class of 1949. She attended York College to earn her teaching certificate and taught school a few years before marriage. Laura was united in marriage to Earle Kleeb on October 18, 1956 at her parent’s home near York, NE. The couple lived in the Round Valley community near Broken Bow for many years. When her children were in school, she enjoyed being a teacher’s aide at Round Valley County School. She later retired to Grand Island and enjoyed many hobbies including gardening, especially her flower garden, reading and doing cross word puzzles. Laura made her choice to serve the Lord at a young age and was true to that choice her whole life. She is survived by her children: Karla (Mike) Weber of Bar Nunn, WY and Kelvin (Suzy) Kleeb of rural Alda, NE; grandchildren, Ibby (Shane) Bridwell of Phillipsburg, KS, Judd (Shelby) Allan of rural Alda; great grandchildren, Kaysen and Tate Allan and #3 on the way. She is also survived by Mike Weber’s children and grandchildren: Neal and Hannah Weber, Tara, Callie and Wren, Justin and Megan Weber, Jason and Fallon Weber and Willow, Taylor Weber, Melissa Weber and her fiancé, Max Deininger, all of Wyoming; brother, Albert (Doris) Grotz; sister in law, Ravay Kleeb; and many nieces, nephews, cousins and friends. Laura was preceded in death by her husband Earle, who passed in August 2015; and her parents. Online condolences may be directed to www.livson.com. Memorials may be directed to the family to be designated at a later date. A special thanks for all the wonderful care given to Laura by the Staff at the Good Samaritan Village in Grand Island.

Laura Elizabeth Kleeb, 88, of Grand Island, passed away peacefully with family by her side on Saturday, December 28, 2019 at Good Samaritan Society in Grand Island. Funeral service will be 10:30 am Friday, January 3, 2019 at Livingston-Sondermann... View Obituary & Service Information

The family of Laura Elizabeth Kleeb created this Life Tributes page to make it easy to share your memories.

Send flowers to the Kleeb family.