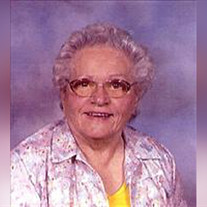 Laura M. Walter, 87, of Grand Island died Thursday, July 10, 2008 at the Golden Living Center at Park Place in Grand Island. Graveside services will be on Tuesday at 1:00 P.M. at the Ewing Nebraska cemetery. The Rev. Costa Oliveira will officiate. Visitation will be on Monday from 4:00 until 8:00 P.M. at Livingston-Sondermann Funeral Home. Mrs. Walter was born on May 9, 1921 at Ewing to Edward and Burtha (Ullrich) Urban. Survivors of the immediate family include two daughters, Pat Shriner of Alda, and Janet Walter of Grand Island; two sons, Dean Walter of Florida, and Stanley Walter of Washington; three sisters, Myrtle Wilkening of Washington, Mable Bollwitt of O’Neill, and Lucille Hampton of Santee, California. Additional survivors include four grandchildren, John Walter, Becky Walter, Kathy Walter, and Deb Shriner; two great-granddchildren, Sharee Shriner and J.D. Shriner; and a sister-in-law, Avis Worth of Lincoln. Mrs. Walter received her education in Ewing and Bartlett, and graduated from Bartlett High School in 1939.  She then attended Wayne State College for two years. She married Alvin Walter on December 20, 1942 in Ewing.   The couple lived in Grand Island for many years.  Mr. Walter died on February 1, 2006. Mrs. Walter enjoyed raising plants, and reading. She was a member of the United Methodist Church. In addition to her husband, she was preceded in death by her parents, one brother, Bud Urban; and one sister, Joyce Payder. Memorials are suggested to the family’s choice.

The family of Laura M. Walter created this Life Tributes page to make it easy to share your memories.

Send flowers to the Walter family.