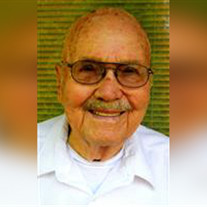 Leon O. Wilsey, 92, of Grand Island, died Wednesday, April 30, 2014 at Tiffany Square Care Center. Memorial services will be at 10:30 am Saturday, May 17, 2014 at Livingston-Sondermann Funeral Home. According to his wishes Mr. Wilsey was cremated.... View Obituary & Service Information

The family of Leon O Wilsey created this Life Tributes page to make it easy to share your memories.

Send flowers to the Wilsey family.