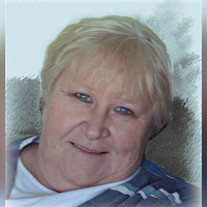 Linda Joann Shaw, 55, of Central City, died Wednesday, January 8, 2014 at St. Francis Medical Center.  Memorial services will be at 11 am Saturday at Livingston-Sondermann Funeral Home.  Mrs. Shaw was born on February 26, 1958 in Albion, Nebraska to Ralph and Opal (Seigal) Johnson.  Linda graduated with honors from Lexington High School in 1976. She was united in marriage to Mike Brummet in 1979. She later married Terry Shaw on May 20, 2005. The couple made their home in Central City.  Linda worked at the Tip-Top Curler Factory, Pamida, and I-80 Conoco. She found her true enjoyment when she began her in home day-care.  Linda enjoyed doing crafts with her sister Karen and spending time with her family. Her greatest love was being a grandmother, and she especially loved camping with her grandchildren.  She is survived by her husband Terry of Central City; her children, Heather and husband Cyrus White Bull, Nicole Brummet, Derik and wife April Brummet and Kali Shaw, her stepsons, Russell Shaw and Randall Shaw; her many grandchildren and great-grandchildren. She is also survived by her best friend, Judy Ferguson, 2 brothers; Tim (Rhonda) Johnson, John (Donna) Johnson, 4 sisters; Donna Eltiste, Karen (Ed) Kelley, Marilyn ( Dave) Huebner and Susie (Clayton) Wenburg and numerous other family and friends.  Linda was preceded in death by her parents and three brothers, Ralph, Robert and Rex Johnson.  Memorials are suggested to the family.  Memorial services will be at 11 am Saturday at Livingston-Sondermann Funeral Home.

The family of Linda Joann Shaw created this Life Tributes page to make it easy to share your memories.

Send flowers to the Shaw family.