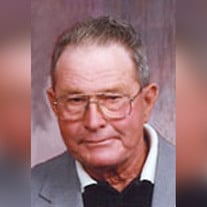 Linden R. Bockmann, 82, of St. Paul, died, Thursday, November 8, 2007 at the Heritage Living Center in St. Paul.    Funeral services will be on Monday at 11:00 A.M. at St. Mark’s Lutheran Church in St. Paul.  The Rev. Joseph W. Javorsky will officiate.    Burial will be on Monday at 2:00 P.M. at the Westlawn Memorial Park Cemetery in Grand Island.    Visitation will be on Sunday from 4:00 until 7:00 P.M. at St. Mark’s Lutheran Church in St. Paul.    Livingston-Sondermann Funeral Home is in charge of arrangements.    Mr. Bockmann was born on February 27, 1925 at Palmer, to William & Marie (Carstens) Bockmann.       Survivors of the immediate family include his wife, Julia of St. Paul; one daughter and son-in-law, Cindy & Jim Campbell of Kearney; and one son and daughter-in-law, Les & Barb Bockmann of Palmer.         Additional survivors include four grandchildren, Melissa Bockmann of Lincoln, Michael Bockmann of St. Libory, Brian Campbell of Fremont, and Eric Campbell of Kearney.       Mr. Bockmann received his education at a country school near Palmer.  After his education, he worked on the family farm.       He married Julia Lamm on December 27, 1950 in Grand Island.       Mr. Bockmann was inducted into the U.S. Army in January of 1951, and was honorably discharged in November of 1951.       Mr. and Mrs. Bockmann farmed for many years in the Gage Valley area near Palmer.  He retired from farming in 2004, and the couple then resided at the Matelyn Retirement Community in St. Paul from June of 2005 until March of 2006.  Mr. Bockmann became a resident at the Heritage Living Center in March of 2006.       Mr. Bockmann’s love in life was farming, and attending and helping at auctions.  He enjoyed building and restoring machinery, listening to Polka Music, and going to Branson, Missouri each year with his wife.       Mr. Bockmann was a member of St. Mark’s Lutheran Church in St. Paul.     In addition to his parents, he was preceded in death by two brothers, Delbert and Harry Bockmann.    Memorials are suggested to St. Mark’s Lutheran Church or to the donor’s choice.

The family of Linden R. Bockmann created this Life Tributes page to make it easy to share your memories.

Send flowers to the Bockmann family.