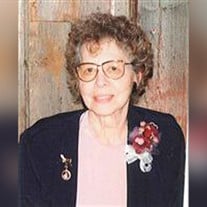 Lola Hoffman, 100, of Doniphan died Monday, November 29, 2010 at Tiffany Care Center in Grand Island. Funeral services will be at 10:30 am Thursday at the United Methodist Church in Doniphan. The Reverend Kelly Karges will officiate. Burial will be in Cedarview Cemetery. Visitation will be from 4-7 pm Wednesday at Livingston-Sondermann Funeral Home in Grand Island. Memorials are suggested to the United Methodist Church in Doniphan. Lola was born on July 3, 1910 in rural Hamilton County to Frank and Mary Nyce. She attended Hall County Schools. She was united in marriage to Arthur C. Hoffman on January 17, 1929 in Kansas. The couple made their home on a farm near Doniphan where she was a homemaker and the couple raised their family. Arthur preceded her in death on June 26, 1990. Lola was a lifetime member of the United Methodist Church of Doniphan where she held many offices and taught Sunday school. She was a member of the Senior Citizens Club, the East Doniphan Extension Club and the Doniphan W.S.C. Group. Her hobbies included sewing, quilting and collecting thimbles. She also enjoyed scrapbooking. Most of all she enjoyed spending time with her family, especially her grandchildren and great grandchildren. She is survived by a son Rex and his wife Eunice Hoffman of Doniphan, a son Richard of Doniphan, a daughter-in-law Linda Hoffman of Giltner, six grandchildren; Thomas Hoffman of Chicago, Roxanne and her husband Craig Mickey of Bertrand, David and his wife Gina Hoffman of Trumbull, Jacque and her husband Tom Keenan of Henderson, Tim and his wife Carisa Hoffman of Kearney, and Gene and his wife Krissy Hoffman of Grand Island. She is also survived by 14 great grandchildren; Jared, Audrey, Brenna, Lindsey, Lexi, Lacey, Levi, Ross, Coltan, Megan, Timothy Jr., Cadence, Hailey and Lane. Lola was preceded in death by her parents, her husband, an infant daughter Mary Lou, a son Robert and daughter-in-law Mary Hoffman.

Lola Hoffman, 100, of Doniphan died Monday, November 29, 2010 at Tiffany Care Center in Grand Island. Funeral services will be at 10:30 am Thursday at the United Methodist Church in Doniphan. The Reverend Kelly Karges will officiate. Burial... View Obituary & Service Information

The family of Lola Hoffman created this Life Tributes page to make it easy to share your memories.

Send flowers to the Hoffman family.