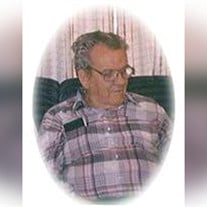 Loren Russell Denning, 84, of Grand Island died Saturday, August 11, 2012 at Park Place Nursing Center in Grand Island. Funeral service will be 10:30 am Wednesday, August 15, at Livingston-Sondermann Funeral Chapel in Grand Island with Pastor Scott Jones officiating. Burial with military honors will follow at Westlawn Memorial Park Cemetery. The family will be receiving friends from 5-8 on Tuesday at the Livingston-Sondermann Chapel. Memorials may be directed to the family for later designation. Loren was born February 5, 1928 to Merl and Eltie Mae (Travis) Denning in Elm Creek, NE. He attended Elm Creek School and graduated in 1945. In 1946, he enlisted in the United States Army and was stationed on the West coast until he was honorably discharged in 1947. He returned to Elm Creek where he worked at the hay mill. He married Ruby Nitsch in 1952. They had 4 children. He was employed as a truck driver for Herman Bros for 12 years. After which he drove truck for several other people until he retired in 1990. He enjoyed trucking because he was able to see much of the country. On April 2, 1998 he married Delores (Whipple) McCoy in Grand Island. During his retirement he enjoyed watching wrestling and NASCAR races and spending time with family. Loren is survived by his wife, Delores; son, Donald Denning of Elm Creek, NE; daughters, Darlene Denning of Elm Creek, Dixie Taylor of Elm Creek, NE; step-daughter, Patricia Cummings of Wichita, KS; grandchildren, Stephen Taylor , Jody Taylor; step-grandchildren, Steven Cummings of Grand Island, NE, Tammy (Denny) Flynn, Shelly (Matt) Foltz; sister, Kathleen McLaughlin of Lincoln, NE; and sister-in-law, Elizabeth Denning of Wylie, SC. Preceding him in death was his parents; daughter, Connie Beavers, step-son, David Lee McCoy; brother, Fred Denning, sister, Caroline Veskrna; and 5 brothers-in –law.

The family of Loren R Denning created this Life Tributes page to make it easy to share your memories.

Send flowers to the Denning family.