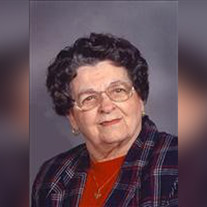 Lyla A. Stohs, 84, of Grand Island died Tuesday, November 18, 2008, at the Nebraska Heart Hospital in Lincoln. Services will be at 10: 00 AM Saturday at Trinity Lutheran Church in Grand Island.  A family prayer service will take place in the chapel of the church prior to services at 9:45 AM.   There will be no viewing at the church prior to the services. The Rev. Kris Rebentisch will officiate.  Burial will be at 4 PM Saturday in the Bethlehem Lutheran Cemetery in Bremen, KS.  The Rev. John Kirk will officiate. Visitation will from 4 to 8 PM Friday at Livingston-Sondermann Funeral Home in Grand Island. Lyla was born July 9, 1924, at Bremen, KS to George H. and Minnie M. (Friedrichs) Koeneke. Survivors of the immediate family include her husband, Dr. Clifford Stohs of Grand Island; three sons and two daughters-in-law, Stanley Krause of Lincoln, NE, Steven and Judy Krause of Odell, NE and Jerry and Hope Krause of Brookfield, WI; one daughter and son-in-law, Sherry and Chuck Hudson of Lexington, MO; one step-son and his wife, Gene and Kristen Stohs of Lincoln, NE; one step-daughter and her husband, Nancy Stohs and Mike Meier of Wauwatosa, WI; one sister and brother-in-law Florence and Gilbert Bluhm of Beatrice, NE; and her sister-in-law, Myrtle Koeneke of Marysville, KS. Additional survivors include thirteen grandchildren and fourteen great-grandchildren. Lyla was baptized and confirmed in the Immanuel Lutheran Church in Bremen.  She attended Immanuel Lutheran School and graduated with the class of 1938.  She helped on the family farm following her education. Lyla married Emil G. Krause on Feb. 3, 1946.  The couple farmed in the Bremen area until 1973 when a farm accident took Mr. Krause’s life. Lyla moved to Marysville, KS.  She met Dr. Clifford Stohs and they were married on June 26, 1977, at Marysville.  They moved to Grand Island, NE where Lyla resided up until her death. She enjoyed raising and arranging flowers, gardening, sewing, playing cards and reading the Bible. Lyla was a member of Trinity Lutheran Church, the Ruth Society and numerous other church organizations.  She was also a member of the Dorcas Ladies at Bethlehem Lutheran Church in Bremen while living in the area. She was preceded in death by her parents; first husband, Emil Krause; and one brother, Lavern Koeneke. Memorials are suggested to the Lutheran Hour, Trinity Lutheran School, Heartland Lutheran High School or the Chiropractic Educational Foundation.

Lyla A. Stohs, 84, of Grand Island died Tuesday, November 18, 2008, at the Nebraska Heart Hospital in Lincoln. Services will be at 10: 00 AM Saturday at Trinity Lutheran Church in Grand Island.  A family prayer service will take place in the... View Obituary & Service Information

The family of Lyla A. Stohs created this Life Tributes page to make it easy to share your memories.

Send flowers to the Stohs family.