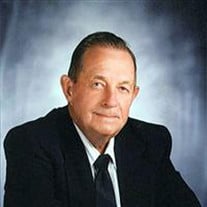 Lyle Leroy Kamper, 80, of Grand Island died Saturday, February 5, 2011 at St. Francis Medical Center. Graveside services will be at 11:30 am Wednesday at Rose Hill Cemetery in Palmer, Nebraska. Pastor Mark Oberbeck will officiate. Livingston-Sondermann Funeral Home is serving the family. Memorials are suggested to the family. Lyle was born on August 5, 1930 in Archer, Nebraska to Herman and Lydia (Luebke) Kamper. He was united in marriage to Doralene June Lilienthal on June 24, 1955. From this marriage with the love of his life, Lyle and Doralene had three children. He entered the United States Navy in June of 1950 and was honorably discharged in June of 1954. Lyle will always be remembered for his great ability to talk around the table adding historic facts on the lay of the land and the weather. His sense of perspective from being born in the Great Depression was always an educational preparation for the extravagance of today’s spending mentality. We are pretty sure he holds the world’s record for holding Montgomery Ward and Sears to their lifetime guarantee on lawn and garden hoses. Since Lyle was born into a farming family his sense of farming never left his soul. His wonderful neighbors, Tom and Sharon, have said he didn’t mow his lawn, he manicured it. Hands down Lyle had the best Kentucky blue grass in the state of Nebraska on his plot. It truly was the green grass of home. Our nation would have never been built without the ironworker, also well known as the “Roughnecks” throughout history. Lyle was a proud lifetime member of the Ironworkers Union Local 21 out of Omaha. Anyone that knew him recognized instantly his very strong work ethic. He believed if you went to work and worked hard the whole world would step aside for you. He enjoyed many years of comradely with his fellow workers. He put a lot of miles on the road to his jobs, always to return with his ironworker buddy Jessie James. Lyle always took pride in all he did. He is survived by a son, Timothy Allen Kamper of Grand Island, two daughters; Kimberlee Ann Brady of Eden, Utah and Karen Kaye Kamper of Burwell, seven grandchildren; Christopher, Jonathan, Kimber Ann, and Amber June Brady all of Utah, Holly Puente of Kearney, and Hayes and Wyatt Kamper of Burwell and two great grandchildren; Mya Song Brady of Utah and Michael August Puente-Schroeder of Kearney. He is also survived by a brother, Robert Kamper and three sisters; Evelyn James, Lois Crumrine and Melva Jean Kamper. Lyle was preceded in death by his parents, his wife and three brothers; Marvin, Don and Jim Kamper.

The family of Lyle L. Kamper created this Life Tributes page to make it easy to share your memories.

Send flowers to the Kamper family.