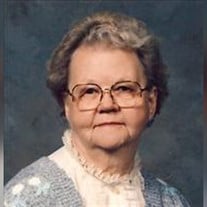 Mabel E. Real, 88, of Grand Island, died Monday, December 1, 2008 at the St. Francis Medical Center in Grand Island. Funeral services will be on Friday at 11:00 A.M. at the Ansley Christian Church.  The Rev. Jim Ferguson will officiate. Burial will be at the Ansley Cemetery. Visitation will be on Friday from 10:00 A.M. until service time at the church. Livingston-Sondermann Funeral Home is in charge of arrangements. Mrs. Real was born on October 5, 1920 in Mason City to Christen and Marie (Nielsen) Petersen. Survivors of the immediate family include two sons and daughters-in-law, Edwin & Frances Real of Giltner, and Lyle and Susan Real of St. Louis, Missouri; two brothers and their wives, John & Nellie Lou Petersen of Ansley, and Ray & Beverly Petersen of Kearney. Additional survivors include five grandchildren, Reesa Real of York, Richard Real of Woodbridge, Virginia, Ryan Real of Lincoln, Rachel Bruley of Ashburn, Virginia, and Raylyn Real of Dodge, Nebraska; and nine great-grandchildren. Mrs. Real received her education at a rural school near Mason City. She married Roy R. Real on December 1, 1939 in Taylor.  The couple farmed near Mason City until 1968.  They then moved to Greenwood Nebraska.  Mr. Real died in 1971.  Mrs. Real resided in Greenwood until 2001.  She then lived with her son and daughter-in-law in Giltner.  In 2005, she became a resident at the Lakeview Nursing Home in Grand Island. She enjoyed quilting, crocheting, and needlepoint. In additional to her husband, she was preceded in death by a son, Erwin in  1998, and a granddaughter, Rhonda Real in 1966. Memorials are suggested to the American Heart Association.

The family of Mabel E. Real created this Life Tributes page to make it easy to share your memories.

Send flowers to the Real family.