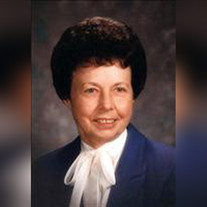 Margaret E. Schroeder, 91, of Grand Island died Friday, July 17, 2009 at Good Samaritan Center of Wood River. Graveside services will be at 11:00 am Monday at the Grand Island City Cemetery. Visitation will be from 4-7 pm Sunday at Livingston-Sondermann Funeral Home. Memorials are suggested to the Grand Island Christian School. Margaret was born on May 17, 1918 in Monroe, Nebraska to Simon and Augusta Pearson. She grew up in Monroe, Nebraska and graduated from Monroe High School in 1936. Following high school she attended Dana College and later moved to Sidney. She was united in marriage to Albert G. Schroeder on November 16, 1941 in Monroe. Margaret aided her husband in the creation of Schroeder Insurance Agency and later the  Great Plains Insurance Company.  The couple was instrumental in starting Grand Island Northwest High School and the Grand Island Christian School in 1979.  She volunteered as a secretary for years at the Grand Island Christian School. She was a member of Evangelical Free Church. Mrs. Schroeder was very active in the Republican Party and was inducted into the Nebraska Republican Party Hall of Fame. She is survived by a son Kent and his wife Linda Schroeder of Kearney, a daughter Kay and her husband Ken Obermiller of Grand Island, eight grandchildren, Kristin Schroeder of Waco, TX, Erin and her husband Brandon Brinegar of Kearney, Lindsey and her husband Ray Miller of Council Bluffs, IA and Jake, Zach, Isaac, Hannah and Noah Obermiller, 4 great grandchildren, Kason, McKinley, Nolan and Colton, a sister Betty Dennison of West St. Paul, MN and a sister-in-law Ardith Pearson of Ankeny, IA. Margaret was preceded in death by her parents, her husband and three brothers, Barney, Harold and Dwight Pearson.

Margaret E. Schroeder, 91, of Grand Island died Friday, July 17, 2009 at Good Samaritan Center of Wood River. Graveside services will be at 11:00 am Monday at the Grand Island City Cemetery. Visitation will be from 4-7 pm Sunday at Livingston-Sondermann... View Obituary & Service Information

The family of Margaret E. Schroeder created this Life Tributes page to make it easy to share your memories.

Send flowers to the Schroeder family.