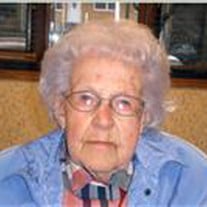 Marie T. Bode Campbell, 98, of Lincoln, formerly of Grand Island died Friday, October 10, 2008, at Village Manor Living Center in Lincoln. Services will be at 10:00 AM Tuesday at Blessed Sacrament Catholic Church in Grand Island.  The Rev. Todd Philipsen will officiate.  Burial will be at 2:30 PM in the St. Bonaventure Cemetery at Raeville, NE. Visitation will be from 4 to 7 PM Monday at Blessed Sacrament Church with a rosary/wake service at 7 PM. Marie Theresa Bode was born February 23, 1910, at Raeville, NE to William and Frances (Fangman) Bode. Marie grew up and attended grade school at St. Bonaventure’s School in Raeville.  She graduated from Raeville High School in 1931.  She then entered Creighton Memorial/St. Joseph Hospital School of Nursing in Omaha in September of 1932, and graduated June 6, 1935. Following her graduation, she first worked at St. Joseph Hospital in Omaha, the St. Francis Hospital in Grand Island, then at Lexington Community Hospital in Lexington, NE.  She went on to Owensboro, KY to work at the Owensboro County Hospital.  In December of 1948, she returned to Grand Island to work for Dr. John H. Easley until June of 1975. For the next five years, Marie did part-time work at St. Francis Hospital and Wedgewood Care Center.  After 1980, she did volunteer work putting in over 1500 hours at St. Francis Hospital delivering mail.  She volunteered at Tiffany Square Care Center praying the rosary with Catholic patients and also with the Red Cross Bloodmobile. Marie married Francis H. Campbell on June 18, 1988, at Blessed Sacrament Church in Grand Island.  Mr. Campbell died on January 27, 2004. Marie was an active member in the Legion of Mary since of 1956, the Catholic Daughters of the Americas, D.C.C.W. and the Altar Society. In lieu of flowers, memorials are suggested to St. Mary’s Cathedral or Blessed Sacrament Church.

The family of Marie Bode Campbell created this Life Tributes page to make it easy to share your memories.

Send flowers to the Campbell family.