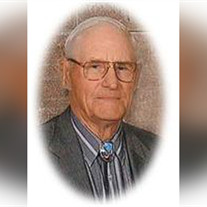 Merle Sundermeier, 86, of Grand Island died Tuesday, June 5, 2012 at Primrose Retirement Community. Funeral services will be at 10:30 am Saturday at St. Pauls Lutheran Church. The Reverend Bill Pavuk will officiate. Burial will be in the Phillips Cemetery. Visitation will be from 4-8 pm Friday with the family receiving friends from 6-8 pm at Livingston-Sondermann Funeral Home. Mr. Sundermeier was born on March 6, 1926 on the family farm in southwest Hamilton County to William H. and Frieda (Obermeier) Sundermeier.  He was baptized on May 16, 1926 at St. Pauls Lutheran Church in southwest Hamilton County by Reverend Gaede and was confirmed at St. Pauls Lutheran Church in Grand Island by Reverend Harmon. Merle attended District #32 School Deepwell in Hamilton County. He graduated from Phillips High School in 1943. After graduation he began farming with his father and got into custom corn shelling until the middle 1950’s. He was united in marriage to Doris Brehm on March 12, 1947 at St. Pauls Lutheran Church. Merle farmed his entire life in the Deepwell and Hamilton precincts. He sold corn and milo hybrid seed for Dekalb Seed for many years as well as irrigation pipe and products for T-L Irrigation of Hastings. He was also on the A.S.C. farm program committee for a number of years. He was elected on the first Jr. Board of the Farmers Union Coop Elevator in Grand Island in the 1950’s. He later was elected to the Senior Board for several terms. He also was on the school board of District #32 until the closing of the school in the 1960’s.  Merle enjoyed working in the yard and his garden. He loved to give his garden produce to neighbors and family. The couple also enjoyed traveling together in the winter and they were able to see many other states and countries together. In April of 2007 Merle and Doris moved into the Regency Retirement Residence. He said he did not realize there was such an easy life. He sold all of his hobby machines and all of his farm and lawn equipment. Their farm sale was on June 9, 2007. In 2011 they moved into Primrose Retirement Community. Survivors of the immediate family include his wife of 65 years, Doris Sundermeier of Grand Island, two sons and daughters-in-law, Bill and Pam Sundermeier of Grand Island, and David and Shirley Sundermeier of Johnson Lake; six grandchildren, twelve great grandchildren and two great great grandchildren. He is also survived by two sisters, Rosella Marsh of Grand Island and Dorothy Moeller of Grand Island, a brother and sister-in-law, Virgil and Jeanine Sundermeier of Grand Island, and a sister-in-law, Phyllis Hongsermeier of Grand Island. Merle was preceded in death by his parents, three brothers-in-law, Elmer Brehm, Henry Moeller and Willard Marsh, and a sister-in-law, Florene McMahon. In lieu of flowers memorials are suggested to St. Pauls Lutheran Church.

Merle Sundermeier, 86, of Grand Island died Tuesday, June 5, 2012 at Primrose Retirement Community. Funeral services will be at 10:30 am Saturday at St. Pauls Lutheran Church. The Reverend Bill Pavuk will officiate. Burial will be in the Phillips... View Obituary & Service Information

The family of Merle W. Sundermeier created this Life Tributes page to make it easy to share your memories.

Send flowers to the Sundermeier family.