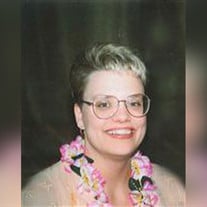 Nancy Hardenberger, 47, of Cairo, Nebraska died Saturday, February 16, 2013 at her home. A celebration of life gathering will be held 5:00 pm Saturday, March 2, 2013 at the Cairo Community Center. You are requested to wear casual attire. Livingston-Sondermann... View Obituary & Service Information

The family of Nancy Hardenberger created this Life Tributes page to make it easy to share your memories.

Send flowers to the Hardenberger family.