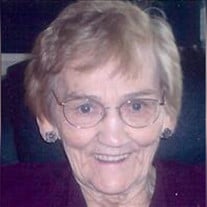 Norma A. Lorenzen, 87, of Grand Island, died Tuesday, January 13, 2009 at the St. Francis Medical Center. Funeral services will be on Friday at 10:00 A.M. at Messiah Lutheran Church.  The Rev. Harvey Johnson will officiate. Burial will be at the Wiegert Cemetery. Visitation will be on Thursday from 5:00 until 8:00 P.M. at Livingston-Sondermann Funeral Home. Mrs. Lorenzen was born on January 28, 1921 at Worms to Henry and Meta (Wiegert) Meyer. Survivors of the immediate family include her husband Max of Grand Island; four sons and three daughters-in-law, Jerry & Barb Lorenzen of Park City, Utah, Ron Lorenzen of Grand Island, Dave & Cindy Lorenzen of Grand Island, and Steve & Judy Lorenzen of Central City; one daughter and son-in-law, Donna & Ron Callihan of Grand Island; and one sister, Helen Koch of Grand Island. Additional survivors include eleven grandchildren and their spouses; Jeff Lorenzen and Marc Lorenzen both of Park City, Utah, Mike Lorenzen of Stuart, Brenda & Casey Connolly of Kingwood, Texas, Dena & Dan Brooks of Grand Island, Rick & Bridgett Callihan of Grapevine, Texas, Tom & Tracy Gardner of Grand Island, Jennifer & Shay Nolan of Grand Island, Lance Lorenzen of Grand Island, Job Lorenzen of Omaha, and Sam Lorenzen of Central City; 13 great-grandchildren; and one sister-in-law, Harriet Meyer of Central City. Mrs. Lorenzen received her education at Zion Lutheran School at Worms. She was employed at Wolbach’s Department Store in Grand Island. Norma married Max Lorenzen on March 12, 1944 at Worms.  The couple lived in Hall County on the family farm for 63 years.  They then moved to Bickford Cottage. Norma loved to cook, bake, can food, sew, garden, quilt, and crochet.  Her greatest love was spending time with her children, grandchildren, and great-grandchildren. She was a member of Messiah Lutheran Church where she taught Sunday School and Vacation Bible School.  She was also active in the Ladies Quilting group at the church. She was a 4-H leader, was a member of the Platte-Duetsche, where she enjoyed playing cards, and was also a member of the Lakeview Home Extension Club. In addition to her parents, she was preceded in death by four brothers, Elmer, Marvin, Robert, and Earl; and by one sister, Edna Quandt. Memorials are suggested to Messiah Lutheran Church or to the family.

Norma A. Lorenzen, 87, of Grand Island, died Tuesday, January 13, 2009 at the St. Francis Medical Center. Funeral services will be on Friday at 10:00 A.M. at Messiah Lutheran Church.  The Rev. Harvey Johnson will officiate. Burial will be... View Obituary & Service Information

The family of Norma A. Lorenzen created this Life Tributes page to make it easy to share your memories.

Send flowers to the Lorenzen family.