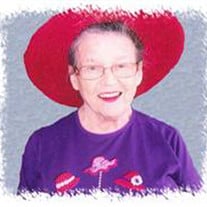 Patricia “Pat” Anne Connelly, 70, of Grand Island died Tuesday, October 11, 2011 at Wedgewood Care Center. Funeral services will be at 10 am Friday at Livingston-Sondermann Funeral Home. The Reverend Jay Vetter will officiate. Burial will be at 2:30 pm Friday at St. Michael’s Cemetery in Spalding, Nebraska. Visitation will be from 4-7 pm Thursday at the funeral home with the family receiving friends from 6-7 pm. Memorials are suggested to the American Cancer Society or the Kidney Association. Mrs. Connelly was born on May 14, 1941 at Wilson, Virginia to Wallace and Nina Pruitt. She grew up and received her education in Wilson. She was united in marriage to Edward Connelly on February 14, 1964 at Norfolk, Virginia. The couple made their home in Grand Island the past six years. They previously lived in Manassas, VA and Virginia Beach, VA. Pat was a member of the Red Hat Society or as Pat would say, “Her Mad Hatters.” Patricia is survived by her husband, Edward Connelly of Grand Island, a daughter, Debra Connelly-Jones of Benson, NC, a son and daughter in law, Jerry and Ginny Connelly of Phoenix, AZ, and  a son in law, James Whorley of Wilson, VA,  eight grandchildren, Tristaka Greer Parker of Magalia, CA, Katie Greer of Georgia, Robert Whorley of Georgia, Whitney Whorley of Wilson, VA, Aimee Whorley of Wilson, VA, Logan, Payton and Chase Connelly of Phoenix, AZ. She is also survived by two brothers, a sister, four brother in laws and four sister in laws; Dan and Gwen Pruitt of Wilson, VA, Floyd and Becky Hudson of Wilson, VA, Jimmy Pruitt of Wilson, VA, Mike and Kate Connelly of Spalding, NE, Pat and Kathy Connelly of Dannebrog, NE, and Gene and Mary Ann Connelly of Grand Island. Preceded in death by her parents, a daughter Audrey Whorley and a brother Robert Pruitt.

The family of Patricia 'Pat' Anne Connelly created this Life Tributes page to make it easy to share your memories.