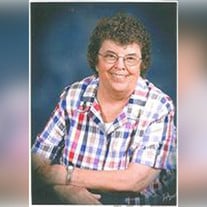 Patricia M. “Trish” McQuillan, 65, of Greeley died Wednesday, December 22, 2010 at Howard Community Hospital in St. Paul with family at her side. Mass of the Resurrection will be at 10:30 am Tuesday at Sacred Heart Catholic Church in Greeley. The Reverend Sid Bruggeman and Reverend Don Burhman will concelebrate. Burial will be in Sacred Heart Cemetery. Visitation will be from 4-5 pm and 6-8 pm Monday with a Vigil Service at 7 pm at the church. Livingston-Sondermann Funeral Home of Grand Island is serving the family. Memorials are suggested to Sacred Heart Catholic Church or the Greeley Rescue Squad. Patricia Marie was born on June 26, 1945 in Greeley to Michael J. and Janet A. (Smith) McQuillan. She grew up in Greeley and received her education at Sacred Heart Catholic School, graduating in 1964. Following high school she entered St. Catherine’s Convent in Kentucky for two years. She then moved to Alaska before returning to Nebraska. She made her home in Lincoln where she worked for Square D. After retirement Trisha moved back to Greeley to be closer to family. She enjoyed bowling, playing golf and watching sports. She was an avid Notre Dame and Boston Red Sox fan, prompting her dad to give her the nickname Sox.  Most of all Trisha enjoyed spending time with her family, especially her nieces and nephews. She was a member of Sacred Heart Catholic Church, the Catholic Daughters, and the American Legion Auxiliary. Survivors include her mother Janet McQuillan of Greeley, a brother and sister in law, Jim McQuillan and his wife Karen of Ogallala, five sisters and brothers in law, Mary Bauer and her husband Louie of Greeley, Janet Atwater and her husband Hank of Omaha, Grace Callahan and her husband Dan of Greeley, Maureen McGuire and her husband Jeff Chase of Addison, TX, and Michaela Smyth and her husband Jerry of Greeley. She is also survived by numerous nieces and nephews. Trisha was preceded by her father, her grandparents and four nephews.

Patricia M. &#8220;Trish&#8221; McQuillan, 65, of Greeley died Wednesday, December 22, 2010 at Howard Community Hospital in St. Paul with family at her side. Mass of the Resurrection will be at 10:30 am Tuesday at Sacred Heart Catholic Church... View Obituary & Service Information

The family of Patricia "Trish" M. McQuillan created this Life Tributes page to make it easy to share your memories.