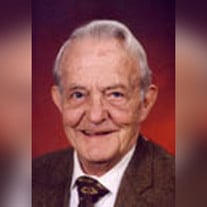 Paul Robert Lee Sensenbach Sr., 81, of Grand Island died Friday, September 28, 2007 at his home.    Funeral services will be on Wednesday at 10:30 A.M. at Messiah Lutheran Church.  The Rev. Harold Stromer will officiate.    Burial will be at the Westlawn Memorial Park Cemetery.    Visitation will be on Tuesday from 4:00 until 7:00 P.M. at Livingston-Sondermann Funeral Home.    Mr. Sensenbach was born on July 16, 1926 in Newark, New Jersey to Eugene & Ethel (Fairchild) Sensenbach.    Survivors of the immediate family include his wife, Katherine of Grand Island; three daughters and one-son-in-law, Janie & Mark Zweifel of Grand Island, Nancy Sensenbach, and Carolyn Urbom both of Grand Island; and one son, P.R. ‘Lee’ Sensenbach of Grand Island; and one brother and sister-in-law, David & Marie Sensenbach of New Jersey.      Additional survivors include five grandchildren, Jessica, Philip, Kathleen, Tyler, and Andrew; and four great-grandchildren, Brandan, Austin, Selena, and Zaine; and one sister-in-law, Jane Sensenbach of New York.    Mr. Sensenbach graduated from Nutley High School in Nutley, New Jersey in 1944.  He then attended the Newark New Jersey College of Engineering.    He then owned and operated Paul’s Luncheonette in Oakland, New Jersey.    He entered the U.S. Army on November 6, 1950 and served during the Korean War.  He was honorably discharged on November 12, 1952.    He married Katherine Parlier on October 18, 1953 in Hickory, North Carolina.    Mr. Sensenbach was employed by Marlow Pumps in Midland Park, New Jersey until 1967.  He also owned and operated Stewart’s Root Beer and the Hobby Shop in New Jersey.    The couple moved to Grand Island in 1976, and Mr. Sensenbach was employed at Berkley Pump, then Monforts, and then Pony Express.  He retired in 1991.    He enjoyed growing a big garden.    Mr. Sensenbach was a member of Messiah Lutheran Church.    In addition to his parents, he was preceded in death by one brother, Wilson Sensenbach.   Memorials are suggested to St. Francis Hospice

Paul Robert Lee Sensenbach Sr., 81, of Grand Island died Friday, September 28, 2007 at his home.    Funeral services will be on Wednesday at 10:30 A.M. at Messiah Lutheran Church.  The Rev. Harold Stromer will officiate.    Burial will be at... View Obituary & Service Information

The family of Paul Robert Lee Sensenbach created this Life Tributes page to make it easy to share your memories.