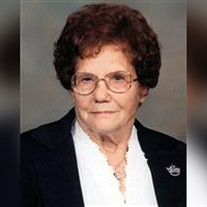 Prekseda (Trixie) D. Shimek, 98, of Grand Island died Sunday, June 5, 2011 at Good Samaritan Village in Wood River. Mass of Resurrection will be at 10 am Friday at Blessed Sacrament Catholic Church. Father Todd Philipsen will officiate. Visitation will be from 5:30 to 7 pm at Blessed Sacrament with a Scripture Wake Service at 7 pm. Burial will be in the Grand Island City Cemetery. Memorials are suggested to Blessed Sacrament Catholic Church or the Donor’s Choice. Mrs. Shimek was born on February 14, 1913 in Valley County. She grew up on the family farm and attended country school until the 8th grade. She was united in marriage to Leon M. Shimek on May 4, 1936 in Elyria, Nebraska. The couple made their home in Elyria until moving to a farm near Boelus in 1956. Trixie worked at the Golden Nugget in Boelus, Nesba’s Café in St. Paul and the Cornhusker Army Ammunition Plant. Mr. Shimek preceded her in death in 1983. Trixie moved to Grand Island in 1990. She was a member of Blessed Sacrament Catholic Church. She loved gardening, canning, flowers, sewing, and especially loved crocheting. Trixie also loved to bake and was known for her homemade bread and kolaches. Survivors include a daughter Marlene (Doug) Windhorst of Kearney, a daughter-in-law Lori Shimek of Omaha, two grandchildren; Ken (Janae) Shimek of Omaha, and Christina Shimek and her husband Rob Engle of Encino, CA. She is also survived by four great grandchildren; Mason, Emma and Morgan Shimek and Naomi Engle, a sister Julia Holmes of Ord, NE, and several nieces and nephews. Trixie was preceded in death by her parents, her husband, a daughter Donna, a son Edwin, a great grandson Carter, and 10 siblings

The family of Prekseda (Trixie) D. Shimek created this Life Tributes page to make it easy to share your memories.