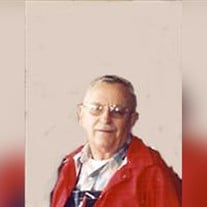 Ralph C. “Putz” Quandt, 75, of Grand Island, died Sunday, October 19, 2008 at the Tiffany Square Care Center. Funeral services will be on Thursday at 10:00 A.M. at the Third City Christian Church.  The Rev. Scott Jones and the Rev. Jerry Quandt will officiate.  Burial will be at the Wiegert Cemetery northeast of Grand Island. Visitation will be on Wednesday from 4:00 until 8:00 P.M. at Livingston-Sondermann Funeral Home. Mr. Quandt was born on July 1, 1933 in Grand Island to Walter & Laura Scherzberg Quandt. Survivors of the immediate family include one son and daughter-in-law, Jerry & Barbara Quandt of Grand Island, two daughters and one son-in-law, Laura & Don Hobbs of Oklahoma City, Oklahoma, and Kristine Marin of Glendale, Arizona; three brothers and two sisters-in-law, Harlan Quandt of  Loup City, Loyal & Lorene Quandt of Lincoln, and Ray & Carol Quandt of Grand Island; one half-brother and his wife, Allen & Carol Quandt of Chapman; two half-sisters and their husbands, Gerri & Gene Thompson of Raymond, and Debra & Paul Smedra of Hickman. Additional survivors include grandchildren, Shelby Hupp of Denver, Courtney Peters and her husband Josh of Hastings, Lora Quandt of Grand Island, Dustin Hobbs of Georgia, J. R. Hobbs of Grand Island, Joe Hupp of Little Rock, Arkansas, Nicole Marin of Glendale, Arizona, Traci Jorgensen and her husband Mike of Papillion; Staci Hubert and her husband Dave of Gretna, Julie Havick of Gretna, and Ryan Havick of Omaha;  great-grandchildren, Eric Martinez and Ella Peters of Hastings, Brandon, Nathan and Brooke Hubert of Gretna, Kami Havick and Dakota Barber of Gretna, and Trevor and Tatum Jorgensen of Papillion; his sister-in-law, Bev Quandt of Grand Island; and his son-in-law, Greg Hupp of Grand Island; as well as numerous nieces and nephews. Mr. Quandt received his education at District #56 north of Grand Island and graduated from Grand Island Senior High in 1951. He married Jean Barnholdt of December 7, 1952 in Palmer. Mr. Quandt worked with his brother Loran as a self-employed bulk milk hauler around the Grand Island area for 47 years. He enjoyed all sports, and he pitched town team baseball in Palmer and Alda.  Because of his love of baseball, he coached in the Grand Island little league program for several years  He was active in the Senior Golf League at Jackrabbit Run, and the Senior Bowling League at Westside Lanes.  But perhaps his greatest love was his dog “Gippy” his big garden, and attending the horse races as Fonner Park. He was preceded in death by his wife Jean in 2002, his daughter Nancy in 2001, his parents, his step-mother, Evelyn Quandt Peterson, an infant sister, Lorene, his brother, Loran in 1985, his half-sister, Patty in 1959; his sister-in-law, Sylvina Quandt, and his nephew, Martin Quandt. Memorials are suggested to Third City Christian Church or to Asera Care Hospice. Christian Church or to Asera Care Hospice.

The family of Ralph C. 'Putz' Quandt created this Life Tributes page to make it easy to share your memories.