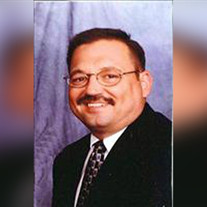 Ray Oseka, 53, of Grand Island died Wednesday, March 25, 2009 at home after a lengthy battle with cancer. Funeral services will be at 10:00 am Saturday at Blessed Sacrament Catholic Church. Father Todd Philipsen will officiate. Visitation will be from 4-7 pm Friday at Livingston-Sondermann Funeral Home with a Scripture Wake Service at 7 pm. Burial will be in Westlawn Memorial Park. In lieu of flowers memorials are suggested to Blessed Catholic Church, Boy Scout Troop 119 or the family’s choice. Ray was born on July 26, 1955 at Omaha, Nebraska the son of Tony and Theresa (Staskiewicz) Oseka. He grew up in Omaha and graduated from Omaha South High School in 1973. He furthered his education at the University of Nebraska at Omaha and in 1976, graduated from Worsham College of Mortuary Science in Chicago, IL. He was united in marriage to JoAnn Kosmicki on October 16, 1976 at Resurrection Catholic Church in Grand Island. The couple made their home in Omaha where he worked for Staskiewicz Mortuary. In 1977 the couple moved to Grand Island where he began his employment with Apfel-Butler-Geddes Funeral Home. He worked there until 2004. He was a member of Blessed Sacrament Catholic Church, the Knights of Columbus, of which he was a Third and Fourth Degree member. He was past Faithful Navigator of the Fourth Degree Council of St. Mary’s Cathedral in Grand Island. Ray was a former Scoutmaster of Boy Scout Troop 119 and former board member of the Overland Trails Council for the Boy Scouts of America; Past President of the Sertoma Club and a former board member of the Nebraska Off Highway Vehicle Association. He is survived by his wife JoAnn of Grand Island, a son and daughter-in-law Justin and Anna Oseka and a daughter Alicia Oseka and her special friend Travis Wicht all of Grand Island. His mother Theresa Oseka of Omaha, two brothers: Russell and his wife Laurie of Bellevue, NE and Roger and his wife Wendy of Papillion, NE; two brothers-in-law and their wives: Alfred and Judy Kosmicki of Grand Island and Larry and Chris Kosmicki of Boelus; two sisters-in-law and their husbands: Marlene and Richard Schmidt of Grand Island and Rose and Bill Dixson of St. Paul, as well as numerous aunts, uncles, nieces and nephews. He was preceded in death by his father, Tony Oseka and a sister, Regina Oseka. Ray will be remembered as loving the outdoors, especially camping, fishing, hunting and ATVing.

The family of Raymond A. Oseka created this Life Tributes page to make it easy to share your memories.

Send flowers to the Oseka family.