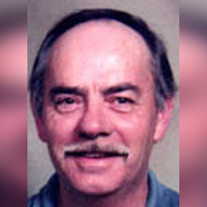 Richard E. Anderson, 67, of Grand Island, died Wednesday, March 1, 2006 at Beverly Healthcare at Parkplace. Funeral services will be on Monday at 1:00 P.M. at Livingston-Sondermann Funeral Home. The Rev. Jerry Quandt will officiate. Visitation will be on Sunday from 4:00 until 8:00 P.M. at the funeral home. Following the funeral service, cremation will take place at Westlawn Memorial Park Crematory. Mr. Anderson was born on November 30, 1938 in Golden, Colorado to Carl & Edna (Schlie) Anderson. Survivors of the immediate family include his wife, Donna of Grand Island; three daughters, Kathy Thompson, Karmen Cahalane, and Kim Anderson all of Grand Island; three sons, Keith Anderson and his special friend, Carol Wallingsford of Grand Island, Kenneth Anderson and his wife Rose of Nickerson, and Keenan Anderson of Grand Island; two brothers, Darrell Anderson of St. Libory, and Eugene Anderson of Grand Island; five sisters, Shirley Martens of Oklahoma, Mary Martin of Aurora, Sharon Jemison of Giltner, Roberta Glines of Central City, and Betty Maybon of Aurora. Additional survivors include 12 grandchildren; and 2 great-grandchildren. Mr. Anderson received his education in Wolbach. He then served in the U.S. Army Reserves in Washington State. He married Donna Rayer on October 3, 1958 in Grand Island. Mr. Anderson was employed as a salesman for Fairbury & Capitol Supply in Grand Island for about 30 years. He was then employed at Menards, and retired in August 2005 due to ill health. He enjoyed fishing, motorcycle racing and watching NASCAR racing. He was preceded in death by his parents, and one brother, Robert. Memorials are suggested to the family.

The family of Richard E. Anderson created this Life Tributes page to make it easy to share your memories.

Send flowers to the Anderson family.