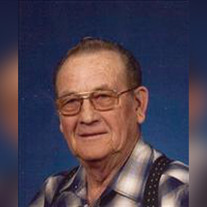 Richard R. ‘Dick’ Jensen, 74, of Grand Island, died Friday, January 16, 2009 at the Skilled Care Unit of the St. Francis Medical Center. Funeral services will be on Monday at 10:30 A.M. at St, Paul’s Lutheran Church.  The Rev. Bill Pavuk will officiate. Burial will be at the Westlawn Memorial Park Cemetery. Visitation will be on Sunday from 4:00 until 8:00 P.M. at Livingston-Sondermann Funeral Home. Mr. Jensen was born on June 19, 1934 at Cotesfield to Edwin and Gurson ‘Lila’ Mortensen Jensen. Survivors of the immediate family include his wife Sharon Schimmer Jensen of Grand Island; three sons and two daughters-in-law Dave & Peg Jensen of Elba, Michael Jensen & Ann Goodwin of Grand Island, and Kevin Jensen of Grand Island; three daughters and sons-in-law, Vicky & Edward Smith of Grand Island, Cheryl & Robert Grogroski of Elba, and Doris & Mike Jensen of Scotia; two step-daughters and one son-in-law, Jen & Jacob Heilveil of Longmont, Colorado, and Staci Huston of Grand Island; three sisters, Myrtle Schults of Grand Island, AnnaMae Julesgard of Elba, and Oline & Dwight Ackles of Scotia; and one brother, Herbert Jensen of Grand Island. Additional survivors include 28 grandchildren; and 25 great-grandchildren; a sister-in-law and her husband, Jan & Larry Johansen of Minden and a brother-in-law and his wife Randy and Brenda Schimmer of Grand Island; as well as many nieces and nephews. Mr. Jensen grew up in Dannevirke and received his education in Elba.  He was the Highway Mechanic District Supervisor at District 4 for the Nebraska Department of roads for over 44 years.  He retired in 1997. Dick enjoyed fishing and he received master angler awards.  He also enjoyed hunting with his family and dogs.  He was also a gifted woodcrafts man, making beautiful pieces starting with his saw mill.  He enjoyed dancing to polka and waltz music, and traveling to Portugal, Italy and Hawaii.  Family was very important to Dick, and he could always make a child smile. He was a member of St. Paul’s Lutheran Church where he volunteered driving the Sunday service van. In addition to his parents, he was preceded in death by one grandson; and three brothers, Kenneth, Alden, and Curtis. Memorials are suggested to the family’s choice.

The family of Richard R. Jensen created this Life Tributes page to make it easy to share your memories.

Send flowers to the Jensen family.