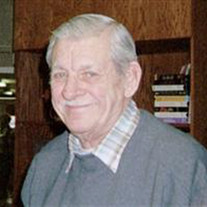 Robert (Bob) Jakubowski, 78, of Grand Island died at his home surrounded by loved ones.   A memorial will be held at the Livingston-Sondermann Funeral Home at 601 N Webb Rd in Grand Island, on Wednesday July 18th from 2:00 – 4:00 PM. There will be a reception following the memorial at St. Mary’s Cathedral.  There will not be a burial service.   Bob was born in Ashton on March 31, 1934 to Rob and Isabelle Jakubowski.  He grew up and received his education in Ashton.   On May 4, 1957 he married Grace Palu.  Bob worked as a ranch hand and they lived on farms in various towns including Elba, Loup City and St. Paul.  Bob moved to Grand Island.  He worked in construction and as a brick layer until his retirement.  Bob later married Rosemarie Buck and they lived in Grand Island until Rosemarie’s passing.    Bob enjoyed life in all ways and spent many hours reading and watching westerns on TV.  He enjoyed dancing, and spending time with friends and family.  Bob enjoyed his Cubs and Huskers and taking his chances on the ponies.  He always had a smile for you and a great sense of humor which always brought laughter to those around him.       Survivors include his five children Christine (Kevin) McKenna of Boulder Creek, CA, Ted (Michelle) Jakubowski of Parker, CO, Laura (Frank) Melish of Elizabeth, CO, Tony Jakubowski of Palmer , NE and Joseph Jakubowski of Santa Cruz, CA, 14 Grandchildren, Josh, Kim, Tyson, Rose, Brian, Dan, Kevin, Jeramiah, Zach, Melissa, Lana, Jacob, Mitch, Levi and 3 great-grandchildren, Christopher, Jayden and Isaac. He is also survived by a sister, Joan (Dick) Lonowski , Terry (Lynn) Jakubowski and Chuck (Dorleen) Jakubowski all of Grand Island.  He also left behind his best friend and companion, his Maltese dog, Sammy and his special friend and care giver, Sandy Johnson.      Bob was preceded in death by his parents Rob and Isabelle Jakubowski, two brothers Tom and Jerry and infant sister Mary Ellen and grandson Charles.   Tributes may be posted online at the Grand Island Independent.  Memorials may be sent to the family at 36478 Forest Trail, Elizabeth, CO 80107.

Robert (Bob) Jakubowski, 78, of Grand Island died at his home surrounded by loved ones.   A memorial will be held at the Livingston-Sondermann Funeral Home at 601 N Webb Rd in Grand Island, on Wednesday July 18th from 2:00 &#8211; 4:00 PM.... View Obituary & Service Information

The family of Robert Jakubowski created this Life Tributes page to make it easy to share your memories.

Robert (Bob) Jakubowski, 78, of Grand Island died at his home...

Send flowers to the Jakubowski family.