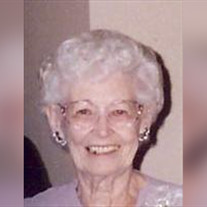 Ruth Williams, 90, of Grand Island, died Sunday, March 22, 2009 at the Western Hall County Good Samaritan Center in Wood River. Funeral services will be on Friday at 11:00 A.M. at Livingston-Sondermann Funeral Home.  The Rev. Jerry Quandt will officiate. Visitation will be on Thursday from 6:00 P.M. until 8:00 P.M. at the funeral home. Mrs. Williams was born on January 24, 1919 in Aurora, Nebraska to William and Zola (Tuckwiller) Thomas. Survivors of the immediate family include one son and daughter-in-law, Allen & Kristy Williams of Lincoln. Additional survivors include four grandchildren, Troy Coonts and Wendy Morris of Eudora, Kansas; Alex & Tami Williams of Omaha, Darci Williams of Lincoln, and Andy & Esha Williams of Lincoln; five great-grandchildren, Jessica Coonts, Victoria Coonts, Danielle Coonts, Meg Williams, and Aden Williams. Mrs. Williams received her education in Aurora and Phillips, and graduated from Marquette High School in 1936.  After her education she worked in the coffee shop at the Yancey Hotel for three years. She married Al Williams on February 23, 1939 in Aurora. She was then employed by the Selective Service Office. During W.W. II, while her husband was in the South Pacific, Mrs. Williams was head of the cashiers at the Ordinance Plant.  She was then employed for three years in the catalog department at Sears-Roebuck.  She became parts manager in 1945, and in 1964 she became service manager.  She retired in 1984. Mrs. Williams was a past president and officer of the Grand Island DOES #147.  She also was a member of the Liederkranz where she served as the secretary-treasurer for 20 years. Mrs. Williams was an avid card player, and also enjoyed bowling.  She enjoyed traveling with the DOES ladies all over the country.  She was an excellent cook, and was known especially for her homemade pies. She was preceded in death by her husband, Al E. Williams; her daughter Vicki Coonts Brewer; her son-in-law, R.D. Coonts; two sisters, Dorothy Larsen and Aliene Kaura; and one brother, David Thomas. Memorials are suggested to the Alzheimer’s Association or St. Paul’s Lutheran Church.

The family of Ruth Williams created this Life Tributes page to make it easy to share your memories.

Send flowers to the Williams family.