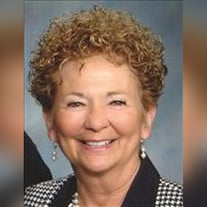 Sallie O. Baxter, 73, of Grand Island, beloved mother, wife, grandmother, great grandmother and devoted friend passed away, at her home, Saturday May 17, 2008, following a long and courageous fight with cancer. Memorial services will be at 10 AM Friday at St. Stephens Episcopal Church.  The Rev. Tim Anderson will officiate. There will be no visitation.  Cremation was provided through Westlawn Memorial Park Crematory.  Arrangements were made through Livingston-Sondermann Funeral Home. Sallie was born July 24, 1934 to Fred and Betty (McElroy) Sundeen. Survivors of the immediate family include her husband Daryl Baxter of Grand Island; four sons and two daughters-in-law Mike and Steve Baxter of Grand Island, Scott and Sherri Baxter of Coppell Texas, and Jeff and Sue Baxter of Cedar Rapids, IA; and one daughter, Lisa Baxter of Golden, CO; two brothers and a sister-in-law, Bob and Sherry Sundeen of Colorado and Charles Sundeen of Denver, CO. Additional survivors include eight grandchildren, Ryan, Amanda, Bryce, Graham, Jameson, Alex, Ben, Madison; one great-grandson, Killian; her mother-in-law, Elsie Baxter of Grand Island; three sisters-in-law, Deanna Eversoll and husband Duane of Lincoln, Donita Cone and husband Bob of Cedar Rapids, IA and Dixie Berhle of Grand Island. She was a lifelong resident of Grand Island and member of Saint Stephens Episcopal Church. Sallie's life passion was her family and she spent all her energy and resources pampering her children and grandchildren.  She also loved Nebraska football and spent the last 50 years attending Husker games.  She worked for over 20 years at Hornady Manufacturing in Grand Island. Sallie and Daryl celebrated their 55th wedding anniversary on April 11, 2008.  They lived their entire life in Grand Island and raised their family on their farm northwest of town. Sallie lived a humble life dedicated to serving others.  She made a positive impact on everyone she met and was truly a living saint. Sallie leaves this earth having established a positive example of a loving wife, mother and grandparent. In lieu of flowers, memorials are suggested to Saint Stephens Church in her memory.

Sallie O. Baxter, 73, of Grand Island, beloved mother, wife, grandmother, great grandmother and devoted friend passed away, at her home, Saturday May 17, 2008, following a long and courageous fight with cancer. Memorial services will be at... View Obituary & Service Information

The family of Sallie O. Baxter created this Life Tributes page to make it easy to share your memories.

Send flowers to the Baxter family.