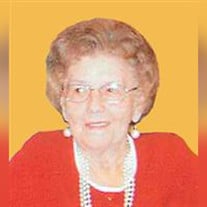 Vera N. Hough, 86, of Grand Island died Monday, February 21, 2011 at Primrose Retirement Community. Funeral services will be at 10:30 am Thursday at Livingston-Sondermann Funeral Home. The Reverend Jay Vetter will officiate. Burial will be in the Grand Island City Cemetery. Visitation will be from 8:30 am until service time on Thursday at the funeral home. Memorials are suggested to the Epworth Village in York, Aseracare Hospice, Diabetic Association or the ALS Association. Vera was born on October 12, 1924 in Amherst, Nebraska to Ernest F. and Gertrude A. (Bauer) Cool. She grew up in Miller, Nebraska and graduated from Miller High. She was united in marriage to Arthur Hough on January 30, 1943 in Phillipsburg, KS. The couple lived in central Nebraska where they raised their family. In 1967 they moved to Grand Island where she worked in retail for various businesses.  Vera enjoyed cross stitching and traveling with her husband in their RV. They visited all 50 states and Canada. Mr. Hough preceded her in death on June 30, 2004. She was a member of Trinity United Methodist Church, the Ladies Auxiliary VFW, the Liederkranz, the Eagles Auxiliary, the Elks Does and the Rolling Eagles RV Club. She held many offices in the Eagles Auxiliary and was also their Grandmother of the Year. Survivors of the immediate family include a daughter and son-in- law, Deanna and Mike Thompson of Poulsbo, WA; two sons and daughters-in-law, Jimmy and Linda Hough of Aurora, and Marlyn “Mort” and Jane Hough of York; a daughter-in-law, Cheryl Hough of Kearney; 10 grandchildren and 18 great grandchildren. Also left to cherish her memory are three sisters and two brothers-in-law, LaRea and Wayne Schnacker of Kearney, Bobbie Pfeiffer of Kearney and Arda and Dick Renfrow of Grand Island; a brother, Ron Cool of Elm Creek, and several nieces and nephews. She was preceded in death by her parents, her husband, a son Donald and two brothers-in-law, Bud Olson and Duane Pfeiffer.

The family of Vera N. Hough created this Life Tributes page to make it easy to share your memories.

Send flowers to the Hough family.