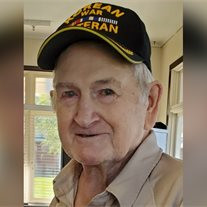 Vernon E. Goodro, 87, of Grand Island passed away Monday, October 21, 2019 at Emerald Nursing and Rehab Lakeview in Grand Island with family by his side. Service details will be determined at a later date. Vernon was born to Ernest R. and Ruby (Garvey) Goodro in December 25, 1931 in French Camp, California. He grew up in California where he attended and graduated school. After high school Vernon worked as a laborer and at age 20 he was enlisted into the Air Force on September 11, 1951 and worked in the 814th Air Police Squadron. During his time in the military Vernon earned several medals including the Korean Service Medal, United Nations Service Medal, National Defense Service Medal and Good Conduct Medal. Vernon received an Honorable discharge on September 10, 1955. After the military Vernon married Donna Nichols-Peterson on April 1, 1960 and to this union had 6 children: Robert, Marvin, Pam, Pat, Kevin and Michael. During this time he worked at Gambles and at Ford as a mechanic in York, Nebraska. After him and Donna divorced in 1969, Vernon moved to Alaska where he met and married Elsie Barger in 1974 and to this union had 5 children: David, Vern Jr., Floyd, Richard and Steven. He worked as Chief of police in Selawik, AK. Later, the family moved to Nebraska where Vernon worked at Chief. Following their life in Nebraska they moved to Greeley Colorado. In December 29, 1986 Vernon was married to Arlene F. Darby in Albuquerque, New Mexico. Vernon worked at Motel 8 as a night clerk until retirement. After Arlene’s passing in 2004 Vernon moved back to Grand Island. Those left to cherish his memory are his children, Marvin and Deb Goodro, Pamela Peterson, Patricia Scheenen and Kevin and Teri Goodro all of Grand Island, NE, David Barger, Vernon Jr. and  Eileen Goodro., Floyd and Pauline Mills, Richard and Chaylen Goodro and Steven Goodro all of Alaska; 35 grandchildren; 75 great grandchildren; and 7 great great grandchildren. He is preceded by his parents; his wife, Arlene; sons, Michael and Robert; sons-in-law, Dana Peterson and Kirk Scheenen; great grandsons, Robert Ramirez Jr., Damian Monzalvo-Pecor, Beau Pecor, and Trevor Sok. Memorials are suggested to the family in care of Pat Scheenen, to be designated at a later date. Online condolences may be directed to www.livson.com.

Vernon E. Goodro, 87, of Grand Island passed away Monday, October 21, 2019 at Emerald Nursing and Rehab Lakeview in Grand Island with family by his side. Service details will be determined at a later date. Vernon was born to Ernest R.... View Obituary & Service Information

The family of Vernon E. Goodro created this Life Tributes page to make it easy to share your memories.

Send flowers to the Goodro family.