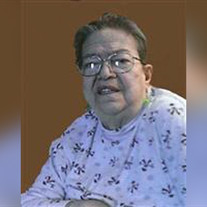 Viola L. Lieth, 72, of Grand Island died Wednesday, March 9, 2011 at St. Francis Medical Center. Funeral services will be at 10:30 am Saturday at Livingston-Sondermann Funeral Home. Reverend Sheri Lodel will officiate. Burial will be in Grand Island City Cemetery. Visitation will be from 4-7 pm Friday at the funeral home. Viola was born on December 5, 1938 at North Loup, Nebraska to Roy and Leora (Cox) Larkin. She was united in marriage to Floyd Lieth. Mr. Lieth preceded her in death on August 29, 1980. Viola enjoyed making earrings, playing bingo and spending time with her family and friends. Survivors of the immediate family include her caregiver and great niece, Cheryl Gutschow and her daughter Jasmine of Grand Island; a daughter Marsha (Dale) Arnold of California, a son, Terry (Lisa) Lieth of Kearney, a daughter Valorie Thomas of Grand Island, and a son, Michael Lieth of Kansas. She is also survived by two brothers; Jesse (Pat) Larkin of Kansas, and Richard (Janey) Larkin of Grand Island, a sister, Grace Nearhood of Grand Island and several Grandchildren, nieces and nephews. In addition to her husband, she is welcomed into heaven by her parents, three brothers; Robert, Johnny and Stanley, and four sisters; Effie, Royetta, Edna and Melva.

The family of Viola L. Lieth created this Life Tributes page to make it easy to share your memories.

Send flowers to the Lieth family.