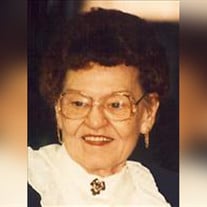 Violet “June” Hydo, 79, of Grand Island died Tuesday, June 24, 2008 at the Grand Island Veterans Home. Services will be at 1:30 PM Friday at Livingston-Sondermann Funeral Home.  Ms. Lillian Cromer will officiate.  Burial will be in the Westlawn Memorial Park Cemetery with military rites provided by the United Veterans Honor Guard. Visitation will be from 4 to 8 PM Thursday with the family receiving friends from 5 to 7 PM at the funeral home. June was born September, 18, 1928, at Wolbach, NE to Cameron and Lily (Rasmussen) Moore. Survivors of the immediate family include two daughters Kathy Mackey and her special friend, Chris Beer of Falls City, and Julie Johnson and husband, Ronald of Elsie, NE; and one sister, Ester Stafford of Grand Island. Additional survivors include five grandchildren, Kevin, Jason and Debra Johnson, and Jessica Hayes and James Mackey; and two great-grandchildren, Rhiannon Mackey and Corbin Mackey. June grew up in Wolbach, and moved to Salem, Oregon at the age of 17 following the death of her mother.  She graduated from Salem High School in 1948. She enlisted in the U.S. Air Force in 1953 and served as a supply clerk. June met Lee Pulliam while serving in the Air Force, they were married in 1954.  She was discharged in 1955, but moved to various locations with her husband as he continued his career in the Air Force. June attended beauty school while living in Montgomery, Ala. Following Mr. Pulliam’s death in 1968, June and her family moved to Falls City, NE and moved to Grand Island in 1974. She married John Hydo in 1977. Mr. Hydo died in 1993. June moved to the Grand Island Veterans Home in February of 2005 and lived there up until the time of her death. She was preceded in death by both husbands; five brothers, Henry, Charley, Enos, Elmer and William Moore; and three sisters, Dorothy Smeall, Mary Christolear and Helen Kirkendall. Memorials are suggested to the Grand Island Veterans Home Member Activities Fund.

The family of Violet J. "June" Hydo created this Life Tributes page to make it easy to share your memories.