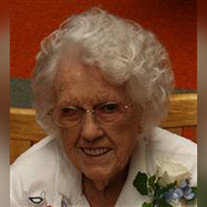 Virginia Moomey, 90, of Grand Island died Wednesday, October 6, 2010 at Lebensraum Retirement Home. Funeral services will be at 10:30 am Monday at Livingston-Sondermann Funeral Home.  The Reverend Bev Lanzendorf will officiate.  Burial will be in the Grand Island City Cemetery. Visitation will be from 4-8 pm Sunday at the funeral home. Memorials are suggested to Faith United Methodist Church or Edith Abbott Memorial Library. Virginia M. Moomey, the oldest daughter of Michael and Phebe Cronin was born March 10, 1920 on a farm near Hazard, NE. She graduated from Hazard High School in 1936. In September 1937 she enrolled in Kearney Teachers College. In the spring of 1938 she received a General Elementary Teaching Certificate. She taught rural school District 48 in Sherman County for three years and two years at Newburg District 7. Following the death of her father in 1943 the family moved to Kearney. Virginia worked as a cashier and bookkeeper for the Hirschfeld Clothing Company until her marriage. She married Aviation Ordinanceman, 2nd Class, Robert F. Moomey July 30, 1945 in Kearney, NE. When Japan was hit by the atomic bombs they knew the war would be shortened.  They were enroute to San Diego when jubilant people lining the highway south of Salt Lake City, Utah shouted “The war is over!” The couple made their home in San Diego, CA until October of 1945. They had driven from Nebraska to San Diego – up the coast to Seattle, WA (after the war) and home to Nebraska in a 1937 Ford with 4 recap tires and a recap spare and had only 3 flat tires. Gas rationing ended on their way to San Diego at Las Vegas. They drove across the desert at night to save on the recap tires. Following his discharge the couple returned to Nebraska where they farmed in the Hazard area. In 1953 they moved to Grand Island where they built a new home. Virginia worked many years with youth. She was a Brownie leader, a Cub Scout Den Mother and a 4-H leader for 10 years.  She did surveys for Lou Harris Polls, Stanford University and the Veteran’s Administration. She also worked the 1980 Census, both as an enumerator and as a supervisor at the time the tornadoes hit Grand Island. She worked as an Income Tax preparer for many years. She was a member of Faith United Methodist Church and was the Church Historian for 10 years.  She was an active member of Ruth Circle of the United Methodist Women.  Virginia and Bob researched the genealogy of both their families. The couple celebrated 63 years of marriage before Bob passed away on December 6, 2008. Virginia is survived by two daughters and sons-in-law, Marcene and Ardell Wurdeman of Columbus, NE and Diane and John Cox of Omaha, NE, and a son and daughter-in-law, Wayne and Jolene Moomey of Taft, TN. Survivors also in include five grandchildren, Nathan Cox, Aaron (Carlie) Cox and Brian (fiancé Katie Langner) Cox, Scott Wurdeman and Sarah Wurdeman, and a sister Lucille Hayes of Council Bluffs, IA. She was preceded in death by her parents, her husband and a sister Reva Psota.

The family of Virginia M. Moomey created this Life Tributes page to make it easy to share your memories.

Send flowers to the Moomey family.