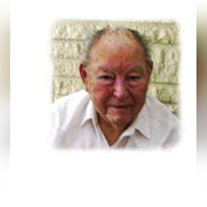 W. Clarence Mabon, Jr., 88, of Grand Island, NE died Monday, March 12, 2012 at the VA Medical Center in Grand Island. Memorial services will be at 10:00 am Saturday, March 24, 2012 at Livingston-Sondermann Funeral Home in Grand Island. The Reverend Lonnie Logan will officiate. According to Mr. Mabon’s wishes he was cremated. Burial will be in the Phillips Cemetery. Memorials are suggested to the Military Order of the Purple Heart or the Phillips Memorial Hall Fund. William Clarence Mabon, Jr. was born on March 11, 1924 in Phillips, Nebraska to William Clarence and Selma Josephine (Littlefield) Mabon. He grew up in Phillips and graduated from Phillips High School. Following graduation he attended York College before being drafted into the military. He entered the United States Army in February 1943 serving during World War II, including the Battle of the Bulge. He was honorably discharged in November of 1945 and was a Purple Heart recipient. Following his discharge he graduated from York College and then attended photography school in New Haven, CT. He returned to Nebraska to work for studios in Lincoln and Columbus. In 1957 he moved to Rapid City, SD where he founded Studio Mabon in 1959. He sold the studio in the early 1970’s and began selling caps and gowns, yearbooks and class rings to high schools. In 1996 he went to work for Sam’s Club until retiring in 2005. Following retirement Clarence moved to Grand Island to be closer to family. Throughout his life Clarence loved traveling the world. He was a life member of the Military Order of the Purple Heart and a life member of the Disabled American Veterans. He was a past president of the Rocky Mountain Professional Photographers Association, a past member of the Cosmopolitan Club and a lifetime member of the Elks. He is survived by a sister, Josephine “Marise” Mabon-Hopkins of Grand Island; three sisters-in-law, Betty Mabon of Grand Island,  Royce Mabon  of Omaha and Carol Mabon of Monument, CO; and numerous nieces and nephews. Clarence was preceded in death by his parents and three brothers, Robert, Merlin and Irl Mabon.

The family of W. Clarence Mabon, Jr created this Life Tributes page to make it easy to share your memories.

Send flowers to the Mabon, family.