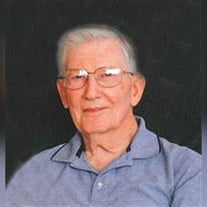 Warren Harding McDowell, 87, passed away April 18, 2011, at Grand Island, NE. A celebration of life will be held at Billings Funeral Home, Woodward, OK and burial will be in Mooreland, OK on May 14, 2011. Warren grew up in Mooreland and graduated with honors from Mooreland High School as class president and captain of the basketball team. As a Future Farmers of America member, he raised the state Grand Champion lamb in 1940. Since this was the time leading up to World War II, he enlisted in the Army Air Corps. He served with distinction as a radar operator, navigator and bombardier with the B-29 Experiment Perilous, stationed primarily on Guam. Warren was promoted rapidly and was a Captain in the Air Force before his 20th birthday. In 1947, at age 24, driving his Buick convertible, he was caught in the disastrous tornado that hit Woodward and was severely injured. But he was blessed during that hospital stay because he met Gladys Mae Gardner of Quinlan, who soon made him forget about the previous girlfriends. Warren and Gladys were married December 25, 1947. During the Korean War, he was recalled into the Air Force, and left in 1953 as a Major. He soon enrolled at Panhandle State College to earn his teaching degree, and then lived in Plains, Kansas and Zurich, Kansas, where he was principal of the school. Moving to Colorado Springs, CO in 1963, Warren then worked in school administration for the next 17 years. Upon retirement, he served as administrator for a Christian school in Denver. He and Gladys then moved to Arizona and then Mooreland, OK, where he served as Mayor and Town Council member.  To be nearer his children, he and Gladys then moved to Hastings, NE and at the time of his death he was a member of Edgewood Vista Care Center in Grand Island, Ne. Warren loved children and his career choice in education was ideal. He also was very active in his church, teaching Sunday school classes throughout his adult life. He was an avid sports fan and could often be found on the living room floor listening to his favorite team, the Yankees, and keeping the box score. He loved to laugh, keeping friends and family delighted with his sense of humor. He was an active member of the Church of Christ and also, with Gladys, spent many hours as a volunteer at Woodward Regional Hospital. He is preceded in death by his parents, Earl and Tresa McDowell, his wife, Gladys; one son, Kevin Reed; brothers Edgar, Everett, Verle, and Clair; nephew Kenneth, and sisters Thelma and Faye. He is survived by one sister, Glenda Ingraham of Buffalo, OK, one son, Mark McDowell and wife Pat of Longmont, CO, on daughter, Kristin Henry and husband Doug of Grand Island, NE, daughter-in-law, Brenda Frame of Lake Havasu City, AZ, ten grandchildren, ten great grandchildren, and a host of nieces, nephews and friends who loved him. Memorial contributions may be made to the Mooreland Senior Center or the Woodward Regional Center Volunteer Organization.

Warren Harding McDowell, 87, passed away April 18, 2011, at Grand Island, NE. A celebration of life will be held at Billings Funeral Home, Woodward, OK and burial will be in Mooreland, OK on May 14, 2011. Warren grew up in Mooreland and graduated... View Obituary & Service Information

The family of Warren H. McDowell created this Life Tributes page to make it easy to share your memories.

Send flowers to the McDowell family.