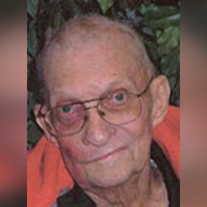 William “Bill” Kruse, 75, of Grand Island, died Wednesday, July 18, 2007 at the Grand Island Veterans Home.   Services will be Saturday at 10:30 A.M. at Livingston-Sondermann Funeral Home.  The Rev. Harold Stromer will officiate.  Burial will follow in the Westlawn Memorial Park Cemetery.   Visitation will be from 4-8 PM, Friday, July 20 at the funeral home.   Bill was born September 28, 1931 at Chapman, NE, to George and Rose M. (Stueven) Kruse. Bill was never married.   Survivors of the immediate family include nephew, Jack Kruse of Grand Island, niece & nephew-in-law, Jan & Russ Hettinger of St. Paul, niece & nephew-in-law, Judy & Dan Mora of Grand Island, niece, Jerri Kruse of Buckley Air Force Base in Aurora, CO. and sister-in-law, Doris (Kruse) Wagner of Grand Island.   Additional survivors include, great-nieces and nephews, Quentin, Corey & Amy Hettinger, Daniel, Danielle and Tessa Mora.   Bill attended Chapman grade school and went on to Walnut Junior High and graduated from Grand Island Senior High in 1949.  He helped his dad farm through his school years.  After graduating he joined the United States Air Force from August 31, 1951 to August 30, 1955.  Bill served during the Korean Era, stationed in both Spain and Germany.  In the Air Force he was a Security Sergeant in the 93rd Air Police Security Squadron.  During his service he received a National Defense Security Medal.   After being discharged, he returned home to help farm with his brother and dad.  Bill then was employed by McMullen Feed Store, Roberts Feed Store and Davis Feed Store.  In 1983 he went to work for the State Road Dept and was there for 15 1/2 years until retirement.   He was a member of Messiah Lutheran Church, VFW, NRA and Platt-Duetsche Society.Bill enjoyed being by himself, hunting, gardening, watching football and boxing as well as spending a little time at the White Horse with his State Road friends.  In his short stay at the Vets Home, he was well liked by all.   He was preceded in death by his parents, brother Ernest, nephew James Kruse and great niece Nitaya Kruse.   Contributions may be made to the family’s choice.

The family of William G. Kruse created this Life Tributes page to make it easy to share your memories.

Send flowers to the Kruse family.