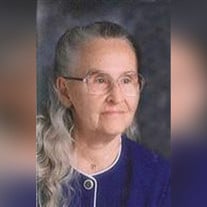 Wilma L. Voss, 84, of Grand Island died Saturday, June 16, 2012 at Golden Living Center Lakeview. Funeral services will be at 10:30 am Thursday at St. Pauls Lutheran Church. The Reverend Bill Pavuk will officiate. Burial will be in Westlawn Memorial Park. Visitation will be from 5-7 pm Wednesday at Livingston-Sondermann Funeral Home. Memorials are suggested to St. Pauls Lutheran Church. Mrs. Voss was born on April 19, 1928 in a farm house in the tiny town of Thompson, in Jefferson County, Nebraska to Ernest and Sophia (Sadil) Witt. She was also welcomed by her sister Thelma, her brother August and her grandmother, Mathilda Witt. The family lived on the farm until 1937 when they moved to Grand Island so Thelma could attend Grand Island Business College, which her father had attended in 1903. Wilma attended Stolley Park School through the 8th grade and then Grand Island Senior High School, graduating in 1944 at age 16. One week after graduation she began working at Northwestern Public Service as a bookkeeper and head cashier. She continued to work there until July 1951. Wilma was united in marriage to Jack Voss on June 18, 1950 at St. Pauls Lutheran Church. The couple made their home in Grand Island. In 1952 Jack built the Lazy V Motel east of Grand Island. In 1963 they sold the motel and opened the Grand Island Western Shop. Wilma and Jack enjoyed traveling together and spending time with family and friends at their cabin at Sherman Reservoir. For 22 years they spent the winter months together in Bradenton, FL. She was also an avid collector of dolls throughout the years. She was a member of St. Pauls Lutheran Church. Survivors of the immediate family include her husband, Jack; a daughter and son-in-law, Carolyn and Lee Mills of Grand Island; a son, David Voss of Grand Island; three grandchildren, Chad (Jessica) Mills of Boelus, Andrea Zibafar of Grand Island, and Sam (Kaylene) Mills of Tualatin, OR; five great grandchildren, Matison, Kayleigh, Tristan, Braeden and Isabelle; two sisters-in-law and brothers-in-law, Gloria and Petter Kurbanick of South Carolina and Betty and Dwayne Life of Kansas; as well as several nieces and nephews. She is also survived by two special caregivers, Vicki and Belinda of Home Care and Companions. Wilma was welcomed into Heaven by her parents, her brother, August and her sister and brother-in-law, Thelma and Ed Hanna.

The family of Wilma Voss created this Life Tributes page to make it easy to share your memories.

Send flowers to the Voss family.