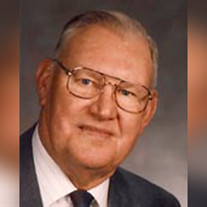 Winston P. Lindsay, 85, of Grand Island, died Sunday, April 8, 2007 at his home in Grand Island.    Funeral services will be on Thursday at 10:30 A.M. at Livingston-Sondermann Funeral Home.  The Rev. Jerry Quandt will officiate.    Burial will be at the Westlawn Memorial Park Cemetery.    Visitation will be on Wednesday from 4:00 until 8:00 P.M. at the funeral home.    Mr. Lindsay was born on December 13, 1921 at Wilcox, Nebraska to Dewey W. & Helen L. (Peterson) Lindsay.    Survivors include three sons and daughters-in-law, Boyd Lindsay of Lincoln, Craig & Pam Lindsay of Grand Island, and Adrian & Nancy Lindsay of Bartlett, Nebraska.      Additional survivors include 10 grandchildren and their spouses, Kelli & Andy Grosshans, Kari & John Wolf, Mark & Kelly Lindsay, Ryan & Jennifer Lindsay, Kristin Lindsay, Matt Lindsay, Miranda & Andrew Kokes, Kristina & Tim Steffensmeier, Cassia & Dustin Sturgeon, and Jacob Heskett; and 7 great-grandchildren.    Mr. Lindsay received his education in Ragan, Nebraska, and graduated in 1939.  He then attended one year of Business College in Grand Island.    He married Mary E. Shumard on February 14, 1942 in Washington, D.C.    He entered the Army Air Corp on October 1, 1943, and was honorably discharged on November 11, 1945.    Mr. Lindsay farmed for 19 years in Harlan County. He then drove a tanker wagon for the Kitten Oil & Poland Oil Company in Grand Island for 13 years.  Mr. Lindsay was then employed as a Park Superintendent for the State of Nebraska for 10 years.  He was then employed by the N.R.A. as a contractor and builder for 3 years.    Mr. Lindsay enjoyed woodworking, was an accomplished welder, and enjoyed working on electronics.  He enjoyed listening to Big Band Music and could fix most anything.    He was preceded in death by his parents, his wife, Mary, in 1998, and by two brothers, Roger and Beryl Lindsay.    Memorials are suggested to the family’s choice.

Winston P. Lindsay, 85, of Grand Island, died Sunday, April 8, 2007 at his home in Grand Island.    Funeral services will be on Thursday at 10:30 A.M. at Livingston-Sondermann Funeral Home.  The Rev. Jerry Quandt will officiate.    Burial will... View Obituary & Service Information

The family of Winston P. Lindsay created this Life Tributes page to make it easy to share your memories.

Send flowers to the Lindsay family.